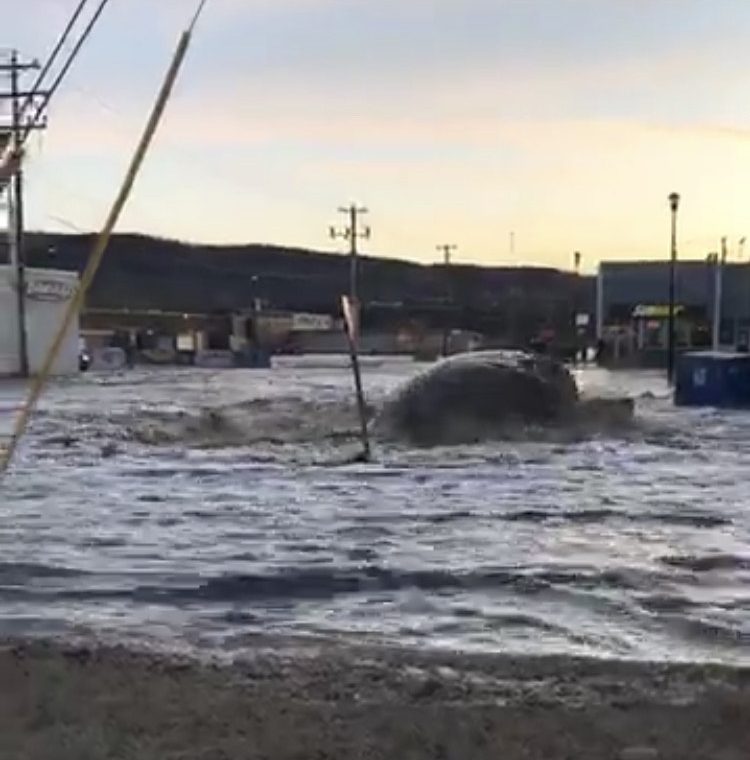 The Town of Peace River says Pat’s Creek was checked the afternoon before it flooded, but despite new measures put in since 2016 to prevent it from flooding, the system was still overwhelmed later in the day.

Pat’s Creek is a known flood risk and was reviewed as part of Peace River’s annual spring break-up measures. The break-up of river ice occurred on Apr. 14 without any issues.

“Town staff had briefed us that they had walked Pats Creek when it was safe to do so a few months previously to ensure that any large debris was cleared out,” Mayor Tom Tarpey says.

Mayor Tarpey says council was advised the trash racks upstream were clear and ready to screen out any large debris, and the flaps or curtains that hang near the entrance were free and not frozen into any ice dam.

Pat’s Creek was checked on Saturday Apr. 18 at about 2 pm and the creek’s flow appeared normal.

“Certainly, not enough to raise concerns, and the racks were still clear,” Tarpey says.

Flooding began about six and a half hours later at 8:30 pm. The Town believes a surge of water and debris coupled with an ice jam caused the backup of water into the Town.

“The debris and water overwhelmed the ability of the racks to function and swept into the viaduct carrying Pats Creek under the Town. Some of this material got caught up in the viaduct and that began acting as sieve. The sieve then just starting capturing more and more debris including ice,” Tarpey says. “This in turn backed up the flow and blew out the manhole between the Centennial Parking Lot and Panago Pizza. This is when water start careening down the street and flowing towards Riverfront Park.”

“We are investigating to confirm that this was indeed the cause,” says Jim McCuaig, Director of Engineering and Infrastructure for the Town of Peace River. “As there was still significant amounts of water coming out of the outfall, this is leading us to believe that this was an issue of capacity. When the ice plugged up part of the culvert that dramatically reduced capacity, which caused the back up and causing the water to divert at the weak points in the system being the access hatch located on 99th Avenue,” he says.

“The higher volume of water was exacerbated by a higher snowpack than normal with Environment reporting snowpacks up to three times normal amounts in some areas. This coupled with warm temperatures increased the melt rate and increased stormwater within Pat’s Creek.”

The Town received flood mitigation funding from the province to upgrade the Pat’s Creek culvert and drainage system. In 2015 phase one of the Pat’s Creek culvert rehabilitation took place, a $2.55 million project to repair the floor of the culvert funded largely by the Alberta Community Resilience Program (ACRP). An additional $2.3 million in funding announced by then Premier Rachel Notley in 2016 was used for phase two of the project.

“We did also purchase and install a check valve, a duckbill check valve. The purpose of this check valve was to allow us to send pooled water around Riverfront Park out to the river without letting water back in,” Tarpey says.

The Town does not yet have an estimate of how much the latest flood damage downtown will cost to repair. Damage assessments will include a technical review to answer what exactly went wrong and what other flood mitigation options could be installed to eliminate or better control this sort of flooding event in future.

“Obviously, the blockage was the immediate cause, but not the root cause,” Tarpey says. “But, I do think we should recognize that the damage was much, much less than in 2014, and I think credit needs to be given to the duckbill valve and the better organized berming this time round by our Public Works SWAT team.”

“Due to the location of Peace River within this drainage basin there will always be some risk for flooding within the Town whether it be one in 50 year events, or one in 100 year events,” McCuaig says. “Every year at this time we work with Alberta Environment and BC Hydro to identify upcoming river and stormwater risks for the Peace, Smoky and Heart rivers as well as Pat’s Creek.”

“Part of this preparation includes check and cycling of all stormwater gates, checking of stormwater outfalls, and conducting a river watch at key locations. Further steps are being looked at to provide additional mitigation measures to reduce this risk to deal with normal flooding events up to and including one in 20 year events.”

“For the immediate future, funding for additional mitigation measures needs to be identified and secured to allow the Town to continually improve their stormwater system,” he says.

“Battling through these adversities will make us a more resilient and successful people. Being Canadian is all about never giving up.”