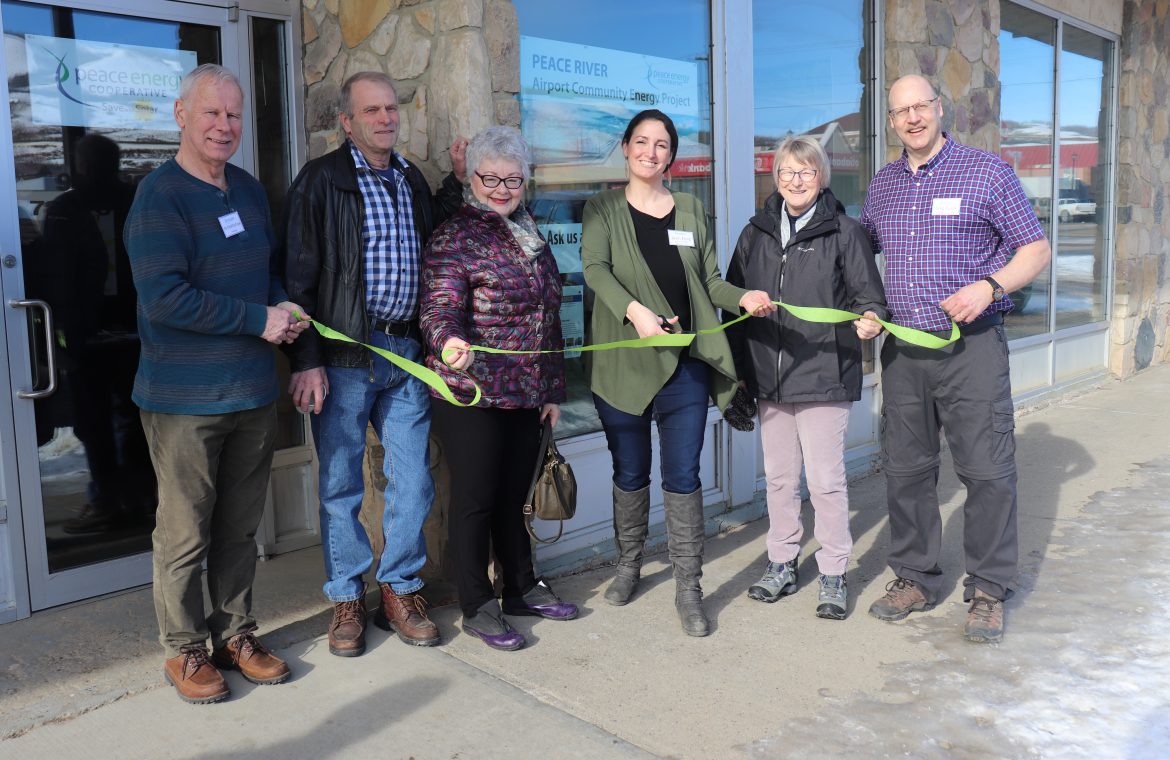 The Peace Energy Renewable Energy Cooperative has officially opened its new office in downtown Peace River.
The co-op held an open house and ribbon cutting on Feb. 26.
“We’re here to help the Peace River area tap into this new resource. As we say, solar is not a future energy, it’s ‘now’ energy!” says Jenn Ford, the solar consultant who was hired to run the new office.
The Peace River co-op office will design and install custom solar systems. It is part of a larger cooperative founded in 2003 and based in Dawson Creek.
“We consider the Peace River basin to be our entire work area,” says Peace Energy Co-op solar consultant Greg Dueck.
The Peace Energy Co-op is planning to build the Alberta Peace region’s first solar farm at the Peace River airport.
The Town of Peace River has confirmed with the co-op that the project will be able to go ahead whether or not a non-profit group takes over the airport ownership and operations in May, as is currently planned.
The co-op has made it to the final stage of a competition for several million dollars in grant money for the project. If the co-op’s grant application is successful, a three megawatt solar array with 7,000 solar panels will be built at the airport and be able to power 350 homes.
However, the project will go ahead whether or not the group is successful in obtaining the grant. Since solar is scaleable it may simply mean a smaller project to start.
“We’re hoping to get the grant of course, but if we don’t, we have to get our investment money from our members, so we’ll have to do our share offering and once we have the money we can see what size we can actually build,” says Dueck.
The co-op will be training workers in solar installation and helping local electricians become “solar-savvy.”
“Peace Energy Co-op is big on local hiring and training and we will need qualified workers to install solar in our area,” Ford says.
The co-op hopes to hold a hiring fair in 2021.
Peace Energy president Al Mottishaw says a wind project by the co-op has been successful already in Dawson Creek, as have other co-op solar projects such as the array in Hudson’s Hope that opened in 2018. Mottishaw says solar is an energy source that is always available. He hopes people will see the benefit in becoming co-op members.
“If they believe in the future, if they believe in new environmental energy sources, I think it can coincide with what we already have,” Mottishaw says.
Memberships cost $200 and will allow members to purchase shares in the future.
Mottishaw says any return on member investment will be long-term.
“If you look at the long-term scale, it’s going to be better for the environment, and the set cost now of doing solar is going to be constant with today’s prices, and energy prices are going to be going up over the years so it will gain you over the long-term,” he says.
“One of our goals with the cooperative as well is to build more than one project, so we will have an ongoing stream for our members to invest in and gain back,” Dueck says.
“That’s our goal is to reproduce this project in a number of areas. So instead of a big company just coming in and building something, we can have local community investment.”
The co-op also held an information session at the Baytex Energy Centre on Feb. 27