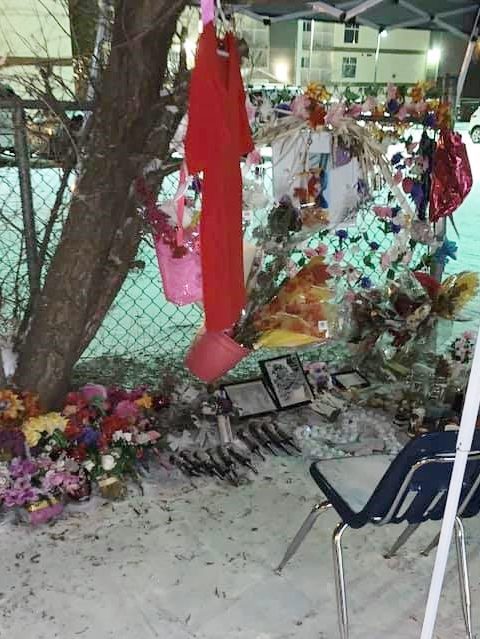 Controversy has erupted over a local memorial.
Victorine “Jennifer” Donovan died on Oct. 8, 2019. An autopsy determined it was a homicide.
Mathew Ian Blachford has been charged with a single count of second-degree murder in relation to her death and remains in custody. His next court date will be Marck 23.
Family and friends have erected a memorial to Donovan on 98th St., where she was found. The memorial features flowers, photos, and a red dress to symbolize missing and murdered indigenous women like Donovan.
Now the family says they are dealing with complaints asking for the memorial to be taken down.
Donovan’s close friend, Carmen Lambert, has taken to Facebook to ask local residents for understanding. In a post to Peace River’s General Forum, she write, “It has come to my attention today that there [have] been complaints about the vigil of Jenn Donovan that remains standing on 98th St. Her mother is receiving complaints from her landlord, who in turn is receiving complaints from the [North Peace Gynmastics Club]! Some children are asking questions and parents are having difficulty explaining and they want it taken down … from what I understand anyway!”
Lambert continues.
“It has been the family’s wishes and intention to keep it up until it is replaced with a friendship memorial bench in the spring time! The vigil has been healing for her children, her family and friends since this tragedy! We gather there to pay our respects, we offer tobacco, we remember her! We have always kept it clean and respectful! On behalf of everyone whose life she touched, we ask the community for your continued support and patience,” Lambert writes.
She adds as the weather warms the temporary memorial will be removed, although the red dress will stay.
“To any parents who maybe struggling on what to say to their children in a situation such as this, I recommend telling them the truth, in a gentle way they can understand,” Lambert writes.
North Peace Gymnastics board has since responded and issued a public statement that no complaints have been filed by their organization.
“We are deeply saddened to hear that there have been comments regarding Jen’s memorial,” the club’s statement says.
“We would like to confirm on behalf of the board of directors and the admin staff … that there have been no complaints filed. We recognize the significance of Jen’s memorial and have personal connections with her family as well.”
In a written statement, the Town of Peace River confirms they received two complaints about the memorial in December. Complainants are kept confidential.
The Town sent a letter to the property owner outlining the bylaw complaints.
“This is really not something we wanted to pursue, we understand the community is grieving and the significance of the memorial,” the Town says.
“However, we do have to follow up on complaints received.”
The Town says the letter asked the property owner to work with the family, but did not specify any timeline for removing the memorial.
Many people in the community have spoken up on Lambert’s original Facebook post in the comments in support of the memorial, and at press time over 475 people have “liked” or “loved” the post.
“I think with all the positive feedback we got it shouldn’t be a problem if it stays until it is replaced with the bench, at least that’s what I’m hoping for,” Lambert tells South Peace News.
VBV Property Management manages the property for the owner. In a written response to a request for comment, VBV says, “If the Town is in agreeance we are absolutely fine with letting the memorial stay until the bench can be completed.”