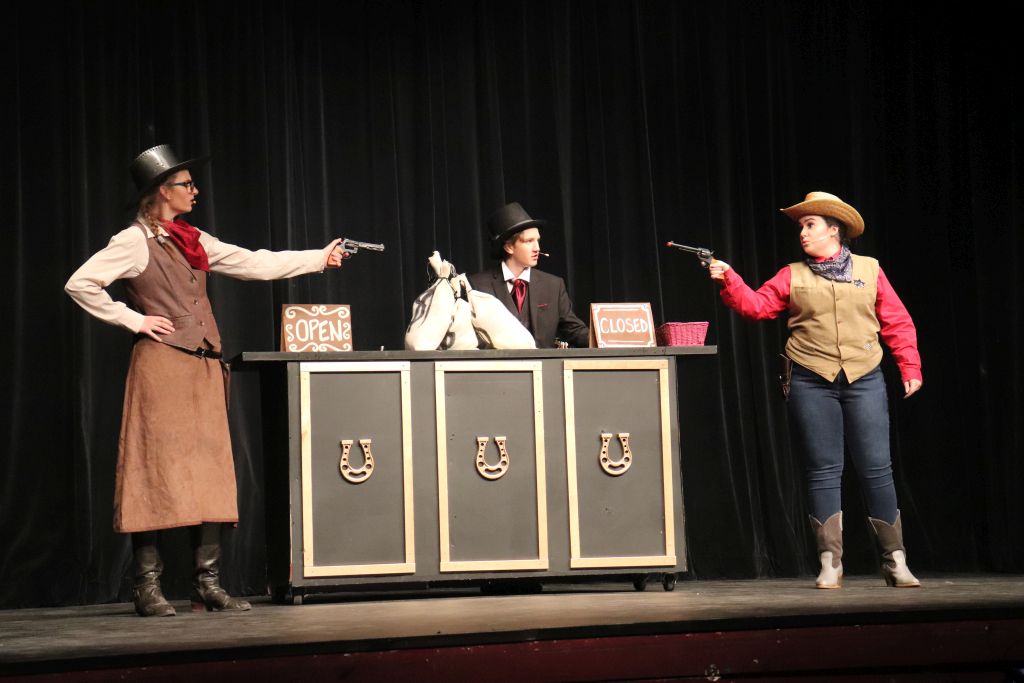 The 2019 junior production The Wild, Wild, Wildest West … or How the West Was Dun, presented by Peace Players, ran at Athabasca Hall Oct. 24-27.

Set in Low Humidity Chasm [instead of the usual Dry Gulch], the play is billed as a spoof of your favourite movie westerns, with characters like Sheriff Wayne John and Calamity Jan [that’s J-A-N-E, the “E” is silent].

With a main cast of 24, an ensemble cast of over 70, a five-person orchestra, and over 40 people in the production team, the cast size must break some kind of small town record.

In her director’s message, Bell says, “once again it’s been a heck of at time that went way too fast.”

“Thank you to my marvellous cast for stepping up to the challenges of way more dialogue than usual.”

Considering the sheer number of entrances and exits with a cast that size, and the large musical numbers, Peace River’s young talent were clearly well rehearsed and gave an entertaining interpretation of the material. The sweet ballad It’s Always Darkest Before the Dawn stood out as a lovely entreaty to keep hope alive in the face of adversity.

The comedic musical melodrama was produced by special arrangement with Pioneer Drama Service, Inc., with a book by Christopher Gieschen, and music and lyrics by Bill Francouer.

Unfortunately, Gieschen’s script includes a stigmatizing character called the Schizophrenic Kid. The villain reinforces a common misunderstanding about schizophrenia by presenting it as the same as split personality disorder, and makes mental illness into a running joke.

This is no fault of the young actors, however, and a handful of other, less problematic villains including Snydley Dastardly, Kid Kid, Black Bart and Blacker Bart kept the plot interesting and complicated the central conflict between banker Richard Coldheart trying to marry Polly Wanda Cracker to control the Cracker property.

Tapped Out Gaming, Magic Happens, and Value Drug Mart all donated to the production.