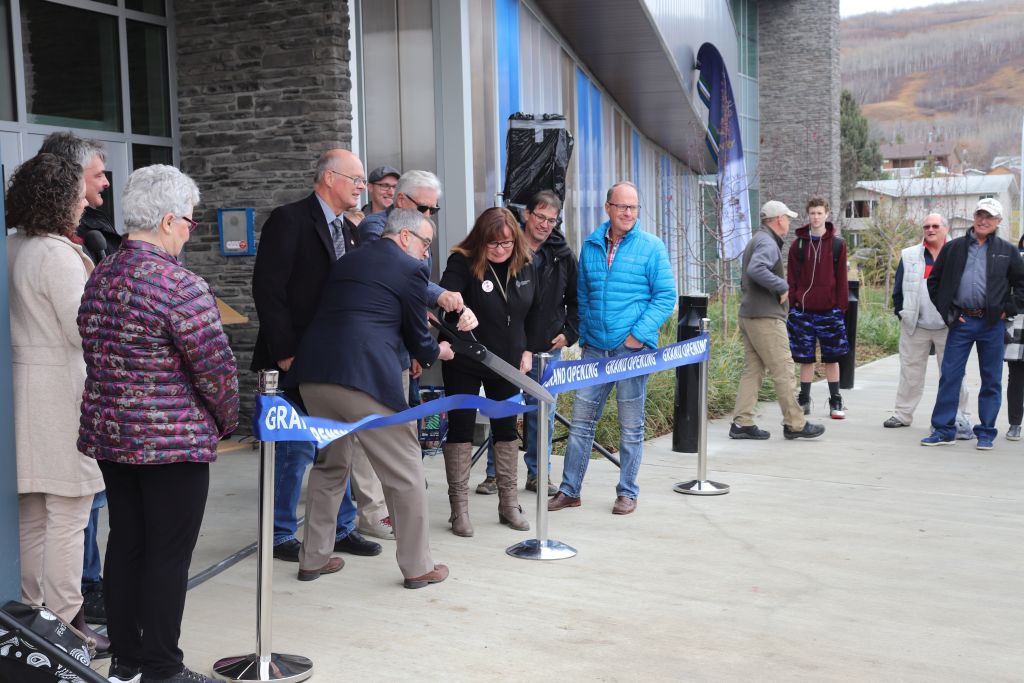 The ribbon has been cut and the Baytex Energy Centre has officially opened its doors.

The grand opening of the new regional multiplex on Oct. 19 brought together the public and representatives of municipal funding partners, including the County of Northern Lights, the M.D. of Peace, Northern Sunrise County, and the Town of Peace River.

A mayor or reeve of each funding municipality helped cut the ribbon to open the facility before people enjoyed snacks and tours.

Peace River Mayor Tom Tarpey says the architects and the prime contractor have done an excellent job on the construction.

“This building is so much more than concrete and steel. It is a community centre. It is a place to come together, and over the decades, I am sure that it will become the heart and soul of Peace River’s sporting community.”

Naming partner Baytex Energy is investing $450,000 over a 10-year period into the new regional recreation centre.

“When we announced the new facility Baytex was there, eager to help support it through a sponsorship, in what has been tough economic times for our oil and gas industry. Thank you for your commitment and confidence in our community. You are one of the cornerstones of our town,” says Mayor Tarpey.

Canadian Natural is investing $150,000 over five years in a deal for the naming rights of the new fieldhouse in the multiplex, and MacMillan Construction is a naming partner for the new indoor playground.

“Yes parents, we have an indoor playground for those -40C days when your kids are driving you up the wall,” says Tarpey.

AGS Mechanical not only worked on the project, but sponsored the volleyball equipment. Andrew and Aireen Gorman of Peace River Subway sponsored the indoor soccer equipment, valued at $5,880, and the Subway mascot was on hand at the grand opening.

More than 70 donations from community members have also contributed to supporting recreation in Peace River, with a new $30,000 donation from Bob and Toni Kinshella just announced.

The Baytex Centre offers a walking and running track, three basketball courts, three volleyball courts, nine pickleball courts, a full soccer field that can be divided into three smaller pitches, an indoor playground that overlooks the NHL-sized ice rink so parents can watch their younger kids and the ice at the same time, and Peace Parent Link.

Champions Health & Fitness also offers a full service gym with cutting edge equipment in the facility, and people using the arena can stop for snacks at Kat’s Concession Stand.

Despite the fact there was some past controversy over whether the new facility would have two ice surfaces, local residents seem happy overall with the multiplex.

Greg Sahaydak says he has used the weight room since it opened Sept 1.

“On first look it seemed small but the way they’ve laid it out it never seems crowded, equipment is great and there are more improvements to come. The people I’ve talked to that have used the fieldhouse seem very happy with it,” he says.

“I think like any major project we can stand back and pick minor details apart but I think it’s a magnificent centre that everyone is this region should be proud of,” says Samuel Elkins.

“It’s wonderful and am so jealous my kids are too old to use the playground facilities in the winter! I would have been so grateful to have access to that when my kids were little,” says Brigette Hopkins.

“Love it,” says local resident Kris Kennedy, who says he has used the rink and fieldhouse so far and bought punch cards for the facility.

“It’s great. Get out and support it and use it.”

For more information on rates and rentals, visit the Baytex Energy Centre Facebook page or the Town of Peace River website.