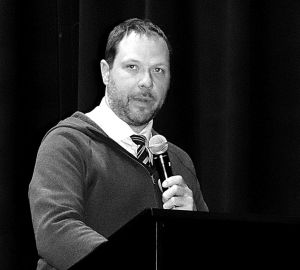 Liberal candidate Rémi Tardif was born in Peace River and raised on a farm north of Donnelly Corner. He got his education at SAIT, Mount Royal College and the University of Calgary and says his previous broadcasting career has brought him all over the province, including Fort McMurray, Camrose and Red Deer.

Tardif is a businessman who is currently a partner in the Chapel of Memories Funeral Homes.

Tardif is also no stranger to politics.

He previously ran for the provincial Liberals in 2012. However, he says it was not originally his plan to seek office.

“Initially, I was soft on running after the leader (David Khan, who practices Indigenous law) approached me,” he says.

“It seems like all there is for choices now is on one side of the scale or the other. People are a bit disgruntled and they’re shopping around for options.”

In terms of where he stands on the political spectrum, Tardif says, “I am ‘centrist’ when it come to my political interests.”

Tardif outlined the Liberal party’s plan to bring in a new HST while eliminating income tax for people who earn $60,000 or less while speaking at the Grimshaw all candidate’s forum.

In terms of his top issues, Tardif says, “It’s not so much HST but a tax shift away from income tax and unpredictable resources revenue and low help people on the lower end of the spectrum.”

“Education is the top issue with implementing flexible classroom size caps and hire 2000+ teachers (to the tune of 200 million).”

Tardif says another main issue for him is Indigenous affairs, and noted his party is the only party planning to create a Minister of Seniors to look after an aging population.