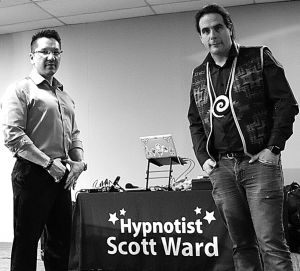 Dakota House is the candidate for the Alberta Party in the Peace River constituency.

House, who was born in Manning, is well- known to fans of Canadian television in the 90’s as the actor who played TeeVee Tenia on North of 60.

He also made cameos on other popular shows such as the X-Files.

Support for the arts and incentives for more film in Alberta is one of the things House is committed to working on if elected as MLA, and something he says he has been discussing with Alberta party leader Stephen Mandel.

“We want to kick start the arts, the film and television and the story telling at that high level again,” House says.

“Throughout the 90’s the revenue generated was tens of millions of dollars, there were stars all over Alberta, everywhere. It was a happening place.”

“When the funding to the arts got cut, it was devastating.”

Alberta Party leader Stephen Mandel recently announced an Alberta Party government would provide film and TV production companies with a tax credit of up to 35 per cent on expenses within the province and up to 65 per cent on eligible salaries.

Besides his work as an actor, House has also founded a charity called Going Miles, and he sees his candidacy as an extension of his work with Canada’s youth.

“I continue to travel all over the country working with our future leaders of today and tomorrow, touching on issues like bullying, cyber bullying, drugs and alcohol, suicide, self-esteem, confidence, basically accommodating to individual community needs. But it seems from coast to coast to coast we are all dealing with a lot of the same issues and the same problems,” he says.

“It’s devastating. It hurts the heart.”

House says he will continue to advocate for youth if elected as MLA, including addressing what he calls the epidemic of addiction and drug use.

House also identifies fixing the large deficit is a key issue, and says the province needs to find more ways to maximize our resources, including forestry, agriculture and energy in order to restore the Alberta advantage.

He also says we need to maximize efficiencies on healthcare since so much is being spent on the service.

“That’s why I got involved in politics. We can’t sit back and have that passive aggressive nature anymore. If you see something that isn’t right, let’s get in there and let’s fix it,” House said.

“I think it’s importantto sit and consult and talk to the people and let them know that their voices will be heard at the legislative level. My voice is going to be loud and I’m going to be heard.”

“That’s one thing I want the people to know, is I’m a man of my word,”

House says. “I don’t want to promise, I want to guarantee.”