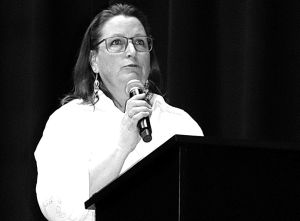 Connie Russell is running for the Freedom Conservative Party (FCP) in the Peace River constituency.

Russell lives near Dixonville, and farms with her husband, and has also been a foster parent for almost 10 years.

The Freedom Conservative Party is the party formed by former UCP MLA Derek Fildebrandt after he was kicked out of the UCP caucus by leader Jason Kenney to sit as an independent, and then banned from running as a UCP candidate.

On her Facebook page and campaign literature, Russell says, “I did not come into wanting to becoming a candidate for the Freedom Conservative Party Of Alberta lightly. It has been with much prayer seeking the Lord for His direction for me in this, and the support of my husband Clifford that I have chosen to do so. It also comes about from checking out every detail of what the Freedom Conservative Party Of Alberta stands for, and what they will fight for, that I have decided to run as a Candidate to give the Peace River ED No. 77 riding a choice for a change.”

“To be honest with you, I felt called to do it,” Russell tells the Express.

Russell feels the freedom promised by Freedom Conservative Party can make her a more effective MLA than a member of the other parties.

“Our [child and family services] system is very broken. It’s a broken system that needs fixed. Because I’m a foster parent I’m privy to a lot of things the general public is not privy to, and it’s one of the things I’m very compassionate about, to be able to step in and try to fix some of the areas that I know could be fixed.”

At election forums, Russell has repeatedly emphasized the FCP’s promise to end equalization payments to the east as a way to return prosperity to Alberta.