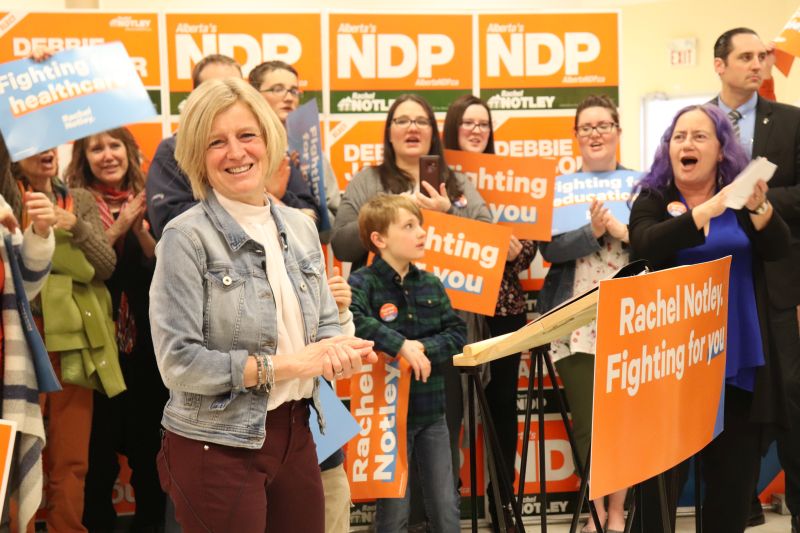 Notley spoke at Debbie Jabbour’s Peace River campaign office in the old Sears building on April 6 to an enthusiastic crowd of over 100 supporters. She also made campaign stops in Grande Prairie, in her hometown of Fairview at Dunvegan-Central Peace-Notley Marg McCuaig-Boyd’s campaign office, and in Slave Lake at the Friendship Centre with Danielle Larivee.

“I’m from up here and I actually know here exists,” said Notley, who was born and raised in Fairview, during an exclusive interview with the Express. “My understanding is Mr Kenney hasn’t made it north of Edmonton since the writ was dropped and the fact of the matter is I just know this part of this country, I know what people’s lives are, it’s in my mind at all times. When people talk to me about their concerns they don’t have to jump up and down to get me to listen because I know it in my bones and that’s why you know we’ve done a lot of the things that we have.”

Notley pointed to her government’s decision to authorize Grande Prairie Regional College (GPRC) to begin the process of granting degrees as one example.

“We’ve invested in GPRC to turn it into a university because I know what it’s like to have to drive six hours to go and get a university degree. Don’t you want to be able to stay in your community, and get the education that you need?” she said.

Notley added her government’s investments in infrastructure were also made with the north in mind.

“I know what it’s like when you can’t get from point A to point B because the highways are falling apart. That’s why we’re investing in the heavy duty load corridor [and] have accelerated that investment, and that’s why we’re doing everything we can to incent more of the ‘Made in Alberta’ plan to have it up here. We know northwestern Alberta in particular drives a lot of economic activity across the whole province, and most people don’t realize that, but I know.”

The government of Alberta recently announced $80 million in future royalty credits for construction of a new methanol plant near Grande Prairie as part of a made-in-Alberta strategy to support diversification in the energy industry. Nauticol Energy is set to start construction on the $2-billion plant with an opening set for 2020. The project is expected to create 3,000 jobs.

During her speech to the assembled crowd in Peace River, which was also livestreamed online, Notley highlighted the construction of a new Peace River bridge as a major local accomplishment for incumbent Peace River MLA Debbie Jabbour and for her government.

“Deb is a friend, she’s been a fabulous colleague in the legislature, and she is a fighter, a fighter for Peace River and for the northern part of this country. Since day one she made it clear to everyone in government that no longer would the idea of a new Peace River bridge be thought of as some kind of strange luxury, but that in fact it is a necessity, a necessity for the people of this community and for our entire vibrant northern economy. Deb fought hard for it and I am so proud to have a fighter like her on our team.”

Notley recalled looking over infrastructure priorities in the early days of the new NDP government.

“We got a chance to look at our infrastructure list, and low and behold many of our public servants had actually been saying that the Peace River bridge was probably the number one transportation priority in the province. Yet year after year after year former governments had let it slide. And we decided, hey let’s just actually listen to people who are giving us good advice. Let’s actually go on the basis of evidence. Let’s make objective decisions. And so we did, and that is why we have that bridge underway now.”

Asked by the Express to address a common belief regularly expressed in Facebook comments that the new Peace River bridge was already planned and would have been built anyway under another conservative government, Notley responded, “That is absolutely not true. That is the most ridiculous thing I have ever heard.”

Notley also addressed the common perception that the NDP does not have a lot of support in rural communities.

“I know things have been tough in the last four years, and I know there are a lot of folks in rural Alberta who supplement their income through the oil and gas industry, so we know they’ve been hurting and I get that. But our plan is actually designed to maintain the industry, to bring more work through the ‘Made in Alberta’ plan and through the upgrading and processing, and there is no plan from Jason Kenney on that let me tell you. Folks that need that kind of support and need those jobs to be there, I urge them to take a second look at our plan for diversification because that’s where they’re going to find that work.”

Notley also addressed the ongoing controversy around UCP leader Jason Kenney’s leadership nomination and the so-called “kamikaze campaign” of Jeff Callaway, which has already seen tens of thousands of fines issued by Alberta’s Office of the Elections Commissioner for illegal donations. A southern Alberta judge recently ruled the investigation could continue despite the election.

Dan Williams, the UCP candidate in Peace River, was originally on Jason Kenney’s Ottawa staff and assisted the UCP leader throughout the Wild Rose and Progressive Conservative party merger and his contentious leadership campaign.

“We know the documentation from CBC that many, many, many people that were close to Kenney on his staff were very directly involved,” Notley said.

“Here’s the bottom line. If Jason Kenney and or the people around him think it is OK to cheat to become the leader of a party and get a shot at being Premier, what exactly can we expect that they will do to stay in government?

“I mean democracy is the single most important right that we all have, and they have gone to great lengths to work around it. At its best the kamikaze campaign was dark backroom politics. At its worst it was illegal and they’re not coming clean on it, and in some cases Mr. Kenney has been caught in outright lies about it already, and they remain under investigation by the RCMP. These are not the qualifications one ought to be considering as acceptable in someone who is running to be Premier or an MLA trying to lead the province.”

Asked about the issues of abortion and LGBTQ rights, both of which have come up at local election forums in the Peace River constituency, Notley said, “First of all, we think that the law is settled on a woman’s right to choose, but when Mr. Kenney says he’s not going to do anything about it, we all know that how you manage your healthcare system will make the difference between whether women can really exercise their right to choose. So we will stand up and actually expand support and resources for women. We will not try to thwart it. Mr. Kenney and his group of candidates who want to have control over women’s bodies need to turn away from that, because those are broken old ideas that women deserve to put into history and be able to move forward from.”

“As far as gay straight alliances go, they save lives, and I don’t know why Mr. Kenney and his team are so committed to attacking these young vulnerable kids, but they will not under my watch get away with it.”

Regarding the recent controversy over recorded comments made in 2013 by UCP candidate Mark Smith, a favourite to potentially become education minister in a new UCP government, she added, “These kids need support and I believe that Mr. Smith doesn’t deserve to be in the legislature with these kinds of discriminatory vile things that he has said.”

“Mr. Kenney had an opportunity as the leader to distance himself from them and to kick Mr. Smith out, and he chose not to, so I think that as a result he failed a test of leadership.”

UCP leader Jason Kenney attended a fundraising event and a pipeline open house in Peace River with local UCP candidates from both the Peace River and Dunvegan-Central Peace-Notley constituencies prior to the writ dropping. There is no word yet if he plans to attend any upcoming local election events.